This website or its third-party tools use cookies which are necessary to its functioning and required to improve your experience. By clicking the consent button, you agree to allow the site to use, collect and/or store cookies.
Please click the consent button to view this website.
I accept
Deny cookies Go Back
You are here: Home / chi kung / The Elements, Tai Chi, Angels and Divine Energies of the Universe

The Elements, Tai Chi, Angels and Divine Healing Energies of the Universe

The elements all exist in all of us, operating collectively to create our life experience.

We can tune into and harmonise these powers through the practice of Yoga and Tai Chi, connecting to the fundamental essence of the elements.

The five basic elements exist in all matter. Water provides the classic example: the solid state of water, ice, is a manifestation of the Earth principle. Latent heat (Fire) in the ice liquefies it, manifesting the Water principle; and then eventually it turns into steam, expressing the Air principle. The steam disappears into Ether or Space. Thus the five basic elements; Space (Akasha), Air, Fire, Water and Earth, are present in one substance. All five originated in the energy issuing from Cosmic Consciousness: all five are present in all matter in the universe. Thus, energy and matter are one.

Humans are a microcosm of nature and so the five basic elements present in all matter also exist within each individual.

The Universal Energy Arts of Tai Chi, Yoga and Chi Kung help us to learn, to observe and embrace the actual earth, water, fire, air and spaciousness within and around us.

We can be Creator of our own life, take control, awaken the magic and power of the elements and transform our lives forever.

In the beginning there was neither existence nor non-existence. There was no atmosphere, no sky, and no realm beyond the sky. There was neither death nor immortality. There was nothing to distinguish night from day. There was only darkness and all was formless and clothed in emptiness. There was neither wind nor breath. The One Thing, Universal Consciousness, alone breathed by its own energy. From that state of unified consciousness the subtle vibrations of the cosmic sound Om (Aum) manifested. From that vibration there first appeared the Space element. This ethereal element then began to move, its subtle movements created the Air, which is Ether in action. The movement of Ether produced friction, and through that friction heat was generated. Particles of heat-energy combined to form intense light and from this light the Fire element manifested. Through the heat of the Fire, certain ethereal elements dissolved and liquefied, manifesting the Water element, and then solidified to form the molecules of Earth. In this way Ether/Space or Dynamic Emptiness manifested into the four elements of Air, Fire, Water, and Earth.

First appeared the space, from which appeared air, from that fire or energy, from which the water and then the earth manifested.

An awareness of the elements is one of most fundamental principles in the practice of Yoga.

Angels represent invisible forces and the essential powers of the elements. An Archangel can be seen as the element in its highest and purest form.

The Archangel of Earth is Uriel…

The earth element has the characteristic of hardness. Its function is to act as a foundation.

The Archangel of Water is Gabriel…

The Archangel of Fire is Michael…

The fire element has the characteristic of heat. It is cultivated through Golden Sun Chi Kung Practice

The Archangel of Air is Raphael…

Air represents mobility: the ability to move freely, lightly, and effortlessly. It is embodied in by mindful movement and  in particular Tai Chi and through  Pranayama, or breath work. 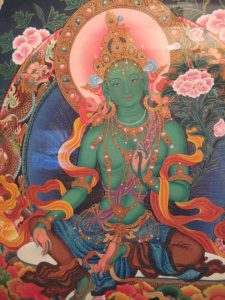 The similarity of the ‘colour’ of air with the colour of Green Tara strongly suggests green light, the purified element of air.

As part of a meditational practice, visualising shining green light emanating from Green Tara can have an incredible healing energy that purifies our physical, emotional, mental, energetic and spiritual bodies, removes obstructions and has the active ability to achieve all things.

Shakyamuni Buddha gave us Anapanasati – Mindfulness with breathing in and breathing out.